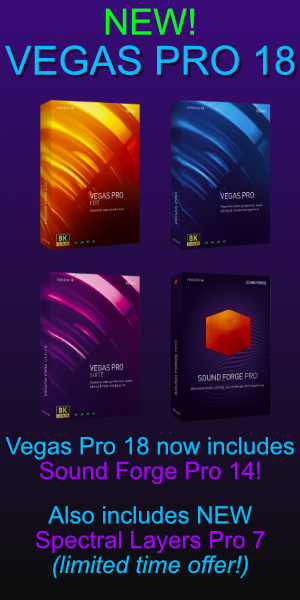 Solved Now I'm wondering Whether I should be using My Copy of Vegas 14, instead of MS 16 Plat..

Now I'm wondering Whether I should be using My Copy of Vegas 14, instead of MS 16 Plat.. was created by HawaiianEye

I understand MS 16 Suite had some juicy additional Newblue Addons.
Besides being easier for beginners and intermediate users,
Is there any superiority MS 16 has over Vegas Pro 14, that you know of?
Or Vegas 14 has over MS 16 plat besides Color Correction Visual tools, or scripts?
It seems Vegas Pro uses GPU?
Any input from any user's perspective would be helpful!
Mahalo!
20 Jun 2019 08:38 #1

Replied by mmcswnavy24 on topic Now I'm wondering Whether I should be using My Copy of Vegas 14, instead of MS 16 Plat..

Well, Vegas Pro or Movie Studio versions 14 and prior, not quite the GPU acceleration you might be thinking. Especially with the newer AMD and nVidia cards. If my old memory serves me correctly, I believe Version 14's were better with the GTX 5xx cards and the AMD cards prior to R9 Fury/Fury Nano, like the HD 7970 and prior. Version 15 & 16 of Vegas Pro/Movie Studio work better with the newer cards, both from what I have read in posts and used. I have Vegas Pro 15/Movie Studio 15 on my "signature" rig, which has the Radeon VII. My older "re-furbished" i7-6800K machine has the new RTX 2070 (Founder's Edition) with Movie Studio Platinum 16 Suite - both render fine when using the associated Magix AVC (AMD VCE) or (NVENC) renders. My signature rig also work(ed) pretty good with DaVinci Resolve Basic 15. The re-furbed guy with the RTX card using the Beta 4 of DR 16 Basic, not so much, as I believe only listing "CUDA" for render engine hurts it in the Basic Version, and the RTX cards use the newer NVENC engine. This may be what some of the forum posters mean when they say there is no GPU acceleration.

I think if you do a search here in the forums, or at the Vegas Forums, there are some posts about the various "plug-ins" available. I've seen your posting about your Real Estate work, which the Doc has helped you with, though I have a hard time "deciphering" those 360 type of videos - again old age, eyes, memory, etc. So, yes, have seen some of your past posts.

So, both Vegas Pro and Movie Studio (can't honestly say about the Pro Edit or MS Base though) newer versions (15 & 16) can utilize the GPU, albeit like other things in this Tech World, the newer cards. Of course, what some might think the cards help tremendously, others still think they render too slow in Vegas. I say, go get a sandwich, some coffee, tea, or soda, pop a movie in the boob-tube and relax.

Replied by HawaiianEye on topic Now I'm wondering Whether I should be using My Copy of Vegas 14, instead of MS 16 Plat..

Thanks for that detail!! Sounds Like You have a coupla nice rigs!
I don't do 360 vids. Just glorified slideshows, though now I'm adding video clips from drone and phone gimbal.
20 Jun 2019 17:16 #3