Using Realplayer you can Download Videos and convert Flash video into an different format.

Then you will be able edit it with Sony Movie Studio Platinum or Sony Vegas Pro and create a brand new video which can then be turned into a DVD or just kept on your computer.

This tutorial is in three parts and includes a Video Tutorial at the very bottom of page.
You will learn:

There is no direct download this video function on YouTube, so if you want to Save a YT video to your computer you will need to install a program to do this for you.

There are a large number of programs and apps you can use to download and save videos from the any website that hosts video. The program I have been using for many years now is Realplayer. Realplayer is available in two different versions: 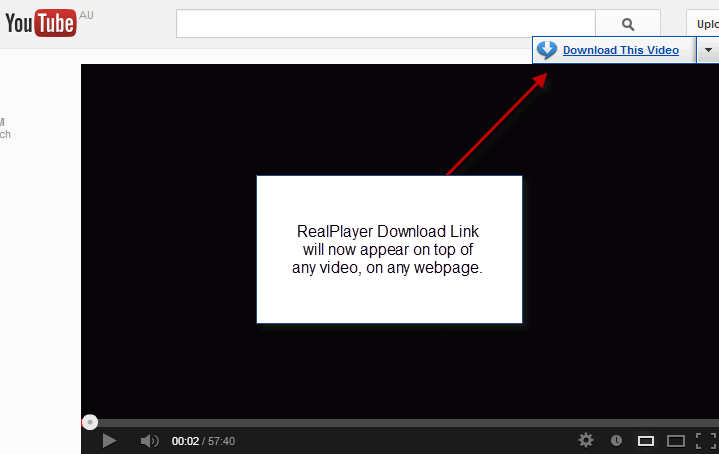 To follow along with my tutorial all you will need is the Free Basic Player. The free version comes standard with the inbuilt download app called Real Downloader which is what you will use to download your videos. Once you have installed RealPlayer, you will see a RealPlayer Download Link appear on the top right corner of any video you see on a webpage.

The downloader that comes with the Basic version of RealPlayer can only download at the normal speed that YouTube allows. So if you are downloading a large 360p or 480p video, it may take some time. I have noticed that under normal conditions, most 720p and 1080p video on YouTube downloads pretty fast these days.

The premium player Realplayer Plus comes with a lot more higher functionality which you can read about on the RealPlayer website. The normal retail price for RealPlayer Plus is $49.95, however it is quite often on sales for $39.95 or less. One of the extra features that the Premium Player comes with is a Download Accelerator. The download accelerator is another app called SpeedBit Video Accelerator which becomes intergrated with the RealPlayer Downloader.

SpeedBit Video Accelerator stops 360p and 480p Video from Buffering while it downloads. Which means downloading a large video takes no time at all. 720p and 1080p Video also download pretty fast with the Speedbit Accelerator in action.

Now to reallly confuse you - it confused me for ages and I really hate it when sofware companies hit you with a surprise during Checkout. When you purchase RealPlayer Plus, you DON'T need any of the extra programs they try and trick you into buying along the way. So UN-CHECK all the sneaky stuff !

Since publishing this article in April 2013, I have discovered a BIG problem with paid version of SpeedBit Video Accelerator. It causes a conflict with the YouTube Uploader and makes it impossible to upload any video to YouTube. The problem occurs in ALL web browsers. So it does not matter if you are uisng Internet Explorer, Google Chrome, Firefox or Opera - you will NOT be able to upload any video to YouTube if you have the accelrator installed. If you expereince this problem, you will have to un-install this program.

I have also discovered that the paid version of SpeedBit Video Accelerator can take over your web browser and re-direct all your searchers to a spammy search engine.

So I no longer use or recommend the paid version of SpeedBit Video Accelerator and have taken it off my computer. It is Malware and a scam. I don't understand how this site is still in business.

YouTube uses two different formats of video. One is Flash Video (.flv) and the other is .mp4

All 240p, 360p and 480p Standard Definition video on YouTube is Flash Format which does not work in Sony Movie Studio Platinum 12 or Sony Vegas Pro 12. If you try and import this the program will just bomb out and say format is not supported. So you will have to convert the Flash Video into a Video Codec that works well in your video editing program before you can use it.

If you downloaded 720p or 1080p video, then you can skip this step. Simply import your .mp4 video into Movie Studio Platinum or Vegas Pro and start editing.

Which Video Converter should I use ?

There seems to be a new Video Converting program released every week, which makes the choice of what to use mind numbingly confusing. What you may discover is that some video converters have trouble in converting flash video accurately. The most common problem I always seem to be dealing with is Audio Sync issues after conversion. I think this may have a lot to do with irregular frame rates and strange video codecs that people use, before they upload their videos to YouTube. Just be aware that if this problem does exist and if it happens to you, you haven't done anything wrong.

So with that explanation out of the way, you may have to experiment with many different video converters until you find the one that works best for you. In the worse case scenario you can always use some editing tricks with Movie Studio Platinum or Vegas Pro to repair any audio sync issues.

You can use Realplayer itself to convert your Flash Video files into a usable video codec, however Realplayer has limited Output Formats for converting video. That's why I prefere to use a different program to do this.

I have chosen to use Any Video Converter for this tutorial. The free version of this program offers a large amount of different Output Formats for various devices and situations. I have used it quite extensively myself over the last two months, after I couldn't get any of my bought video converters to convert some video from U-Stream properly. I was about to give up completely and then remembered Any Video Converter.

When you watch my video tutorial I will show you how to use Any Video Converter properly. In the tutorial I chose to convert my Flash Videos into MPEG2 DVD Format. I found this codec to be very stable and reliable once I get it into Movie Studio or Vegas Pro for editing. Please don't think that you have to use this format - feel free to experiment with other formats and see what works best for yourself.

Importing your video into Movie Studio Platinum 12 or Sony Vegas Pro 12 is a simply process. Using the Explorer tab is an easy way to find your videos. You can simply drag them directly onto the Timeline which imports them into the project at the same time.

The one tip which I show in the video tutorial below is to use the Match Media Settings function inside the Project Properties box. Doing this will make sure that the frame rate of your video matches the project properties. This is always a great thing to do, because it makes sure you will have smooth playback in the Preview Window while you are editing. If your Video Properties are wildly different to the Project Properties, it can make the preview window lag terribly and has the potential for causing audio sync problems after you render your project into a new video. 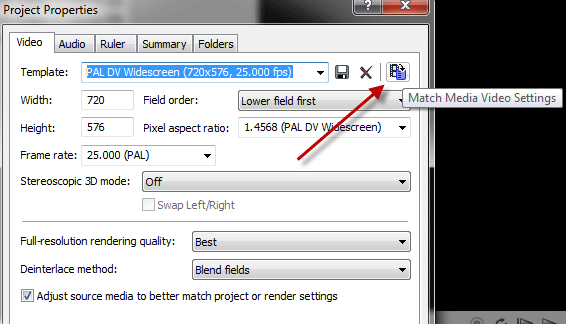 The next tutorial article straight after this one is a great follow up to this lesson. I will be teaching how you can fit any size video onto a DVD. I quite often download and save really good YouTube videos and turn them into DVDs. Being that they are only YouTube videos, I like to fit as much video onto one disc as I can.

To do this you need to render your videos with special Bit Rate settings to keep them relatively small in size, but without loosing too much quality. If this is something you would like to learn, then press this link here after you have watched the video tutorial below.
How to Compress a Long Video onto a DVD

Towards the end of 2013, YouTube changed the way they Stream Video Files. This change has created big problems for all programs and applications that can downlaod and save videos from YouTube. It has broken most of these programs or severely limited the video types you can download from YouTube now. An example of this is 1080p video - most downloaders can only do 720p video now.

This problem also affects the Realplayer Downloader, however I have discovered a temporary solution to this problem which will still give you the ability to download all video formats. Please watch this new video below to get instructions. Original video tutorial is at the very bottom of the article.