Answer: Set the .vf or .veg File Type to associate with the correct version of Vegas Movie Studio or Vegas Pro you want to use by default in Windows.

When you open a previously saved Vegas Movie Studio .vf or Vegas Pro .veg project file, by double-clicking the .vf or .veg file in Documents, the project will open up in the version of Vegas you have told Windows/Vegas to use.

When you have different versions of Vegas installed on the same computer (which is perfectly OK to do), you need to be careful with how you open and save older projects.

Windows can only assign one version of a program to each file type on your computer.

Here is the best way to explain it:
The last time I used Vegas Movie Studio on my computer, I used version 14 and told Windows/Vegas to associate .vf files with version 14.
If I then opened MSP13, here is the window that pops up.
It is asking if I now want to associate .vf files with version 13.
If I say yes to this question, Windows will think that every time I "double-click to open" any .vf file on my computer, that it should be opened with version 13. Because I now use version 14, I need to say NO to this question when opening older projects, saved with older versions of Vegas, using an older version of the program.

There is a quick way you can re-associate any file type with a different program on your computer.

In this example here, I have old projects saved with version 13.
To change the file type/program association, right-click any project file and select Open with / Choose another app.
It is very important to select Choose another app, if you want this change to stick.
Selecting a different version of Vegas from top of the list, will only make the change temporary - which is something you may want to do, when opening older projects with older versions of the program. 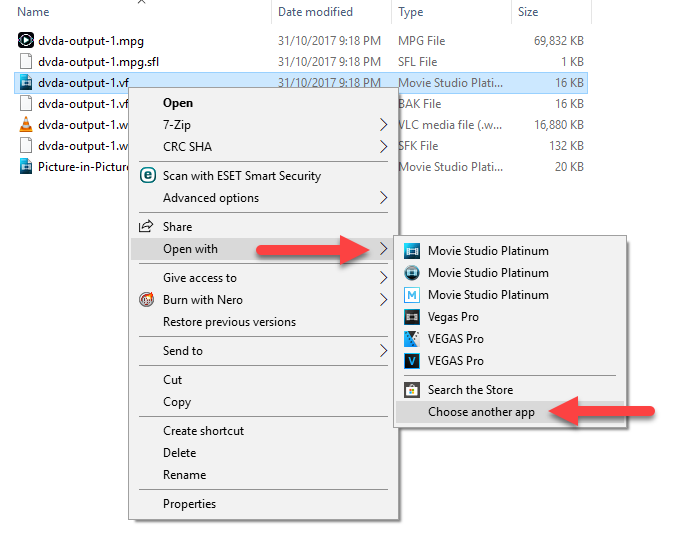 In the final window, select the version you want to set as the Default.
Then tick the box at very bottom that says Always use this app to open .vf files 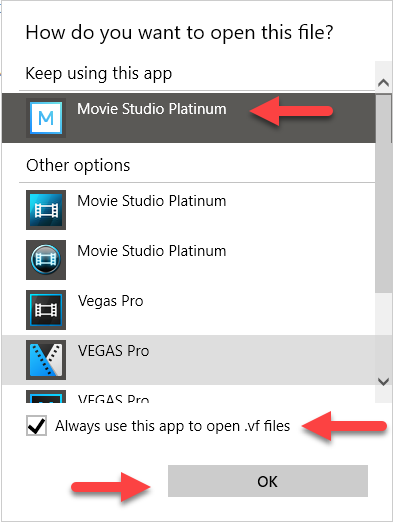