If you are using any version of Sony Movie Studio or Sony Vegas Pro, then you must install Apple Quicktime.

Otherwise you will have problems importing, playing and rendering Apple video formats like Quicktime.

Also in this video, I talk about an Audio Synchronization problem which can occur sometimes with mp4's after they have been rendered in Sony Vegas Movie Studio. When playing back the video on a Windows PC, the Audio goes out of sync "sometimes". I discovered that this random problem is being caused by a setting in Apple Quicktime, that refers ONLY to PC's. So I show how to fix this problem.

DO YOU HAVE APPLE QUICKTIME INSTALLED ?

If you are still using Windows Vista or Windows 7, Quicktime 7.7.9 should work OK for you. If you experience any problems at all, the best solution is to install Quicktime 7.6.

In April 2016, some security vulnerabilities were discovered in Apple Quicktime.

There is no need to panic about this development. From all the available information that I have read, the problem is only with the actual Quicktime player and not with the codecs that get installed with QT. The security flaws can only be activated if you tried to play a .mov video file in QT that is infected. Editing with .mov video files in Vegas Pro and Movie Studio will not infect your computer. All you have to do is STOP playing videos with Quicktime and use a different media player. If you are super worried, delete the quicktimeplayer.exe file from your computer and then nothing bad can happen.

Statement from the Sony Creative Software website, indicates that Apple Quicktime is a requirement 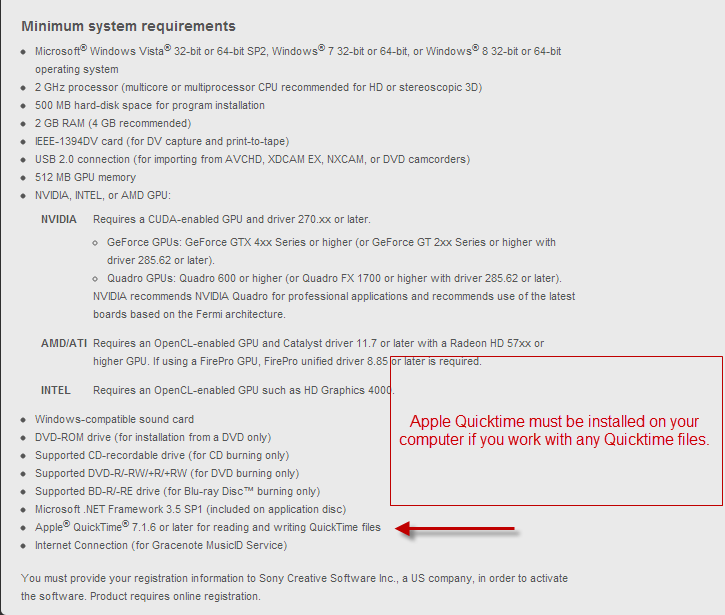