Video card for overall editing was created by easyrider

I am planning on getting a new computer in the near future. I will be getting the amd 1800 processor.I am not too worried about rendering times. My projects are large so I let the computer render all night while I sleep. My concern, is for the watching of the video while I edit the timeline. I hate to use a low resolution ie draft etc. It makes it so much harder to edit.I have researched till I am now confused about which card to get. I am looking at a 1070 nividia card or a amd 580 or wait till amd vegas comes out in numbers to buy. I am looking at the 64 aircooled or the vegas 56. Playing games is not important to me at this time. As long as I keep the drivers up to date, does it matter which card to get. Does GPU help that much in the play back video while you edit? Thanks for your help
28 Aug 2017 00:25 #1

I will break it down into the main points for you.

1. It doesn't matter which video editing program you use, because they all behave the same way.

2. When you drop regular video from a camera or phone into Vegas, that video will be using some form of compression. Compression is what keeps the file sizes much smaller, than a RAW (uncompressed) file, which is dramatically larger. Because the files you are working with are compressed, they need to be decompressed in real time when you start to edit them in your video editing software. What that actually means, is that the data contained in Frame A, may also be needed by Frames C, D and E, to play back properly. So when you play back video through the Preview Window, the program has to look at more than one frame at once, for everything to work correctly - this is what puts a big load on your CPU and GPU while rendering.

3. If you convert your video into an uncompressed format before you begin to edit, all the data is unscrambled and placed evenly within each single frame. This type of video is much easier to play back and edit in real time, which means you should notice little to no lag at all and can set the Preview to higher quality settings. Vegas Pro and Vegas Movie Studio, both have an in-built Proxy Video Creation tool, which will convert all your videos into an easier to play format. If you are not already using this feature, I encourage you to give it a try.

In this tutorial, I show how to set up Proxy Videos in Vegas:
www.moviestudiozen.com/free-tutorials/sony-vegas-pro/553-sony-vegas-zen-tips-3-preview-lag

4. Now to answer your question. A dedicated Nvidia or AMD Radeon graphics card, does help to play back videos while you are editing. The graphics card also helps to accelerate a large range of Video FX and events like NewBlueFX Titler text. The graphics card may also help to accelerate rendering of your final video, depending on the format and graphics card you are using. Unfortunately Vegas has fallen behind the times, when it comes to GPU acceleration of video rendering. However, that is all meant to change today, when Vegas Pro 15 is released, which is meant to include new support for most modern graphics cards.

5. Traditionally in Vegas, AMD Radeon graphics cards have always worked better than Nvidia graphics cards. That is because AMD Radeon has a much better implementation of Open CL (Open Computing Language), compared to Nvidia, which uses their closed & proprietary "CUDA" technology. From what I understand, this information has not changed with the release of AMD Vega GPUs - meaning that AMD Vega is still a superior technology for Vegas, compared to Nvidia.

6. I would like to see what happens over the next couple of weeks, after Vegas Pro 15 is released. If Magix has added proper support for Nvidia graphics cards, the playing field may be more level now, which would mean that an Nvidia or AMD Radeon graphics card should working equally well in Vegas.

7. I have been following the release of AMD Vega very closely, but because these new cards are extremely hard to find right now, no one has had a chance to test them properly in Vegas. AMD Vega 56 does look like the best value for money option, if you are on a budget.

If money was not a problem, I would highly recommend the liquid cooled AMD Vega 64. The reason I say this besides more computer power, is because of the heat and noise problem associated with running a graphics card at high loads. Video Editing programs put more stress on CPUs and Graphics Cards, than any other type of program. If you are going to do a lot of video editing, your computer is going to get loud and hot with one of these AMD Vegas cards, whereas an Nvidia GTX1070 should run cooler and quieter. An Nvidia GTX1070 is an excellent card by the way!

I am planning to build a new computer in the next couple of months. Personally I do have my eye on AMD Vega 64 liquid cooled, if other users have good reports after testing it out. There is a lot of new things happening at the moment and I think it is best to not rush in, but wait until we get a clearer picture.

Thanks for that info Derek. Very interesting.

I find the inbuilt proxy creation of MS14 leaves a lot to be desired. As an experiment I made proxy files of my 1080 50i source in a PAL 1080 project and found:
- You have no choice over the type of file created (unless there's something I've missed)
- The sfvp0 files created are as the attached. Mpeg4. 1280x720 with a framerate of 23.976! in a 50i project
- According to MS14's Help the Proxy files are used for Draft or Preview viewing and the original files are used with Good or Best. This is slightly different to your Tutorial in respect of Good.

So the proxy files are compressed, not frame by frame and have a different framerate. As many will want proxies to get smooth good quality playback they defeat this objective as they can only be used with Draft or Preview not Good or Best, as the original files get used for the latter. No doubt with 4K on anything but a grunty machine they are necessary. But with 1080 even on a low spec machine they are a waste of time. You might as well just use the original files with Draft or Preview. Or better still use the preview option "Adjust size and quality for optimal playback" and let MS do what it finds best. 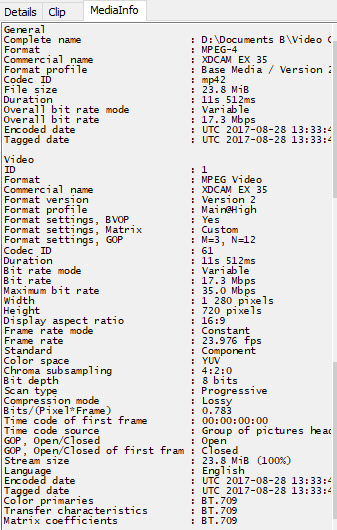 This is a reply for Eric !


According to MS14's Help the Proxy files are used for Draft or Preview viewing and the original files are used with Good or Best. This is slightly different to your Tutorial in respect of Good.

Thanks for picking up the error in my written tutorial Eric - I have rectified the information.
I am aware that the Proxy files will only play/show when the Preview is set to Draft or Preview quality.
This was a dyslexic mistake, that I should have noticed before this. In my video tutorial, I did teach the correct settings.

In all the years I have been using the Create Video Proxy feature, I never thought to check the Frame Rate for the video proxies.
This appears to be a coding error with the program, unless it is deliberate for some unknown reason?
I just did a test with Vegas Movie Studio 14 Platinum and Vegas Pro 14, and tested 24 fps, 25 fps and 30 fps video files - all were converted to 23.976 fps.

This seems like something that needs to be posted on the official Vegas Forums and reported as a potential bug.
Would you like to report this on the main forums or should I do it ?
Remember to turn everything off at least once a week, including your brain, then sit somewhere quiet and just chill out.
Unplugging is the best way to find solutions to your problems.
Peace

Thanks Derek. Do you mind reporting it as you are better at explaining it than me. Plus I expect Magix might take more notice of you.
28 Aug 2017 14:26 #5

Thanks Derek. Do you mind reporting it as you are better at explaining it than me. Plus I expect Magix might take more notice of you.

I might leave it a few days before posting, because I imagine there will be a flood of Vegas Pro 15 posts for the next couple of days.
I also checked Vegas Pro 13 and it is behaving in the same way.
Remember to turn everything off at least once a week, including your brain, then sit somewhere quiet and just chill out.
Unplugging is the best way to find solutions to your problems.
Peace

Replied by easyrider on topic Video card for overall editing

Thank you both for the good information. I had thought about a proxy file, but in light of the new info I guess that option will not help. So I guess all we can do is get the best cpu, gpu, and other hardware to try and get over any bottlenecks with data. I will wait on the new amd cards as well. I just purchased movie studio 14 So unless ms 15 is that much improved I will use it. It will be interesting to see what magix does with this new information. Again , thank you both for the information. Sincerely, Jan
29 Aug 2017 21:40 #7

Playing around further with Proxy files for 1080 I've discovered:

With my preview on Best, when the playback gets to a 'difficult' section like a transition it automatically drops to Preview and later goes back to Best. So MS14 is automatically switching between original files and Proxy versions as it finds necessary in order to maintain the smoothest preview. Clever.

Having created a Proxy file there's no way I can find to switch it off. There's no 'uncreate' Proxy file option, nor an option to switch them off in a project. It appears the only way is to delete the 'svp0' files from the folder where MS places them which is the folder containing the original video files.
10 Oct 2017 19:52 #8