Movie Studio 15 on older computer was created by Ulodesk

As a budget-constrained part-timer, not pro, not gamer, I have been trying to get a handle on reasonable system upgrades with MS 15's new capabilities, notably the Nvenc faster rendering. Magix consistently refers to a "modern Nvidia" GPU for faster rendering, in particular for H. 265. A knowledgeable person on the Vegas forum suggested the Nvidia 1050 as a lower-end compatible GPU; someone else advised that, without upgrading my entire system, there would be little point to getting a newer GPU (see below). I have been back and forth with Magix in email. Magix claims to "list AMD/ATI" as well as "modern" Nvidia, but no such listing is in the manual, I don't recall seeing it elsewhere, and Magix has declined to indicate even which card series are applicable, so as not to show favoritism-- even though it mentions no card but " a modern Nvidia" GPU in the manual.
From what I can glean from various searches hither and yon, Nvidia's Maxwell series 3 is the first that handles Nvenc; if one sticks to H.264, ratehr than H.265, the 500 series and newer can serve. I think. (Can you tell I know almost nothing about this subject?)
My computer at present (don't laugh, please), is at 2012 W7, i5-2400 3.1 GHz, ATI 6450 GPU (not CUDA), 8GB DDR3 RAM. Bought when I had an SD camera, before I got a Vixia full HD camera. At least MS 15 allows simplified proxy file rendering.
I would like to know:
1. If the 1050 is the earliest, moderately-priced GPU that would handle H265 and Nvenc, if I were to update my system (that is, I am assuming it would be a waste on my current one)
2. If there are intermediate upgrades to my system that would offer significant performance improvements in HD video editing now.
I don't know when I'll have money for a system replacement, so issue 1 is speculative at the moment.
Thank you for your advice.
30 Mar 2018 14:32 #1

Replied by DoctorZen on topic Movie Studio 15 on older computer

Moderator Message: I have moved your message into the Computer Hardware forum.

To answer your question about upgrading your Graphics Card, I will share with you my own similar situation first.
I built my own computer in 2011 and used the best 4x Core Intel CPU that was available at that time - an Intel i7-2600k.
My graphics card was an Nvidia GTX460 - a mid level GPU for that time. It died an untimely death 18 months ago and I managed to buy a 2nd hand Nvidia GTX570 on eBay to replace it.

Over the last 7 years I have upgraded multiple drives to larger capacities (I am now maxed out with 5x Drives) and I replaced the C-Drive with a Samsung SSD, and also did the free upgrade to Windows 10. My system is still working very well. Not as fast as the latest CPUs and GPUs, but adequate enough to get all my work done. However, it is time to build a new system before something else reaches the end of it's life.

Short answer first:
It's probably best to continue using your current system and not try to install a newer generation Graphics Card.
The only piece of hardware that I recommend most people upgrade on an older system, is to install an SSD (Solid State Drive) for the C-Drive, which is where Windows and all your programs live. If your C-Drive is only a Hard Drive, that will be slowing down a lot of functions. Installing an SSD will make your computer feel new again. Then you can move all your Data onto secondary Hard Drives.

There is a problem with installing a modern Graphics Card in an older computer.
1. Windows 10 is much better optimized to work with modern computer hardware.
2. A Motherboard from 2012, will most likely be using an older generation PCIe specification (the slot that your Graphics Card connects to).
The older generation PCIe specification is much slower than what it is now, which means a lot of the speed increase you may get from the latest Nvidia GPUs, will be bottlenecked on your older Motherboard. This is also closely related to your current CPU as well - the same bottleneck problem.

Problem No.2 is why I decided to not waste any money on upgrading my own Graphics Card, to the latest Nvidia GPUs.
I am having to be patient and wait until I have enough budget to build a new system.

Basically I think you are in the same situation as myself.
It would be better to save up and replace everything in one go.
The new AMD Ryzen 8X Core CPUs are unbelievable great value and perfect for Video Editing.
The new Intel Coffee Lake 6x Core CPUs, are also unbelievable great value, super powerful and perfect for Video Editing.
An Nvidia GTX1060 paired with one of the above CPUs, would give you a super fast PC compared to what you are using now.
As I said before, all computers should be using an SSD for the C-drive now - this is a no-brainer!
You could recycle any current Hard Drives you may have, to save on cost a little.

On a different topic, you need to be aware of a new setting in Vegas Movie Studio Platinum 15.
Version 15 now uses the new Magix AVC encoder as the default encoder, however this encoder is better suited for modern PC hardware.
The older Mainconcept AVC encoder is switched off by default, but can be manually turned back on.
Hold the SHIFT key down and go to Options/Preferences.
Select the Internal tab
Type "avc" into the search box at bottom.
Set Enable Mainconcept AVC... to TRUE and then re-boot Vegas.
You will now see Mainconcept AVC/AAC as an option in the Render As window. 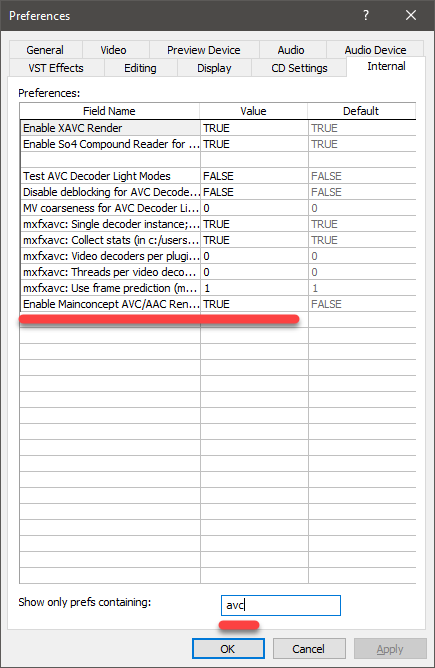 There is also another setting for people using older generation Graphics Cards.
Go to Options/Preferences/General
Turn on Legacy GPU rendering
This should mean you can now utilize your older graphics card with the older Mainconcept encoder. 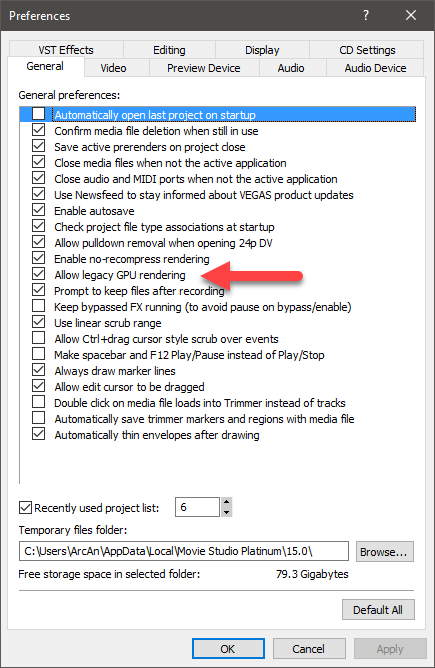 Replied by Ulodesk on topic Movie Studio 15 on older computer

My genuine thanks for your thoughtful and extensive message.
The following user(s) said Thank You: DoctorZen
01 Apr 2018 02:08 #3