Please see the attached screenshots, so what is happening firstly is this. In Pan/Crop, when I insert a keyframe and change a parameter value, the preview refreshes perhaps the first time. If I then add in a different keyframe and change the value of the same parameter, from this point onward the preview window stops refreshing, as per images #1 and #2 you can see the position value has changed but the preview window is the same as it has not refreshed, even when I scroll between them now. This is also true for the effects. If I had the effects window opened, and changed an effect parameter, the preview does not update either.

I tested this in two different systems. Same deal. Both worked fine for this in V15. I also noticed that, unlike previous versions, when rendering out the preview doesn't update as it moves through the render either.

Image #3 is about this, possibly related - now, I am certain that in previous versions of MSP, when I had the Pan/Crop (or effect automation) window open, as I scrolled along the event timeline, this would sync up so that the cursor in the main project timeline moves to the same position automatically. This is not happening anymore.

Has anyone else had this experience and solved it? I moved up to V17 from V15 because I read that this would solve the issue in relation to earlier versions not being able to read many of the Font files I have, and that was true. But now this so.... hmmm.
Last Edit:07 Aug 2022 10:10 by soularpower 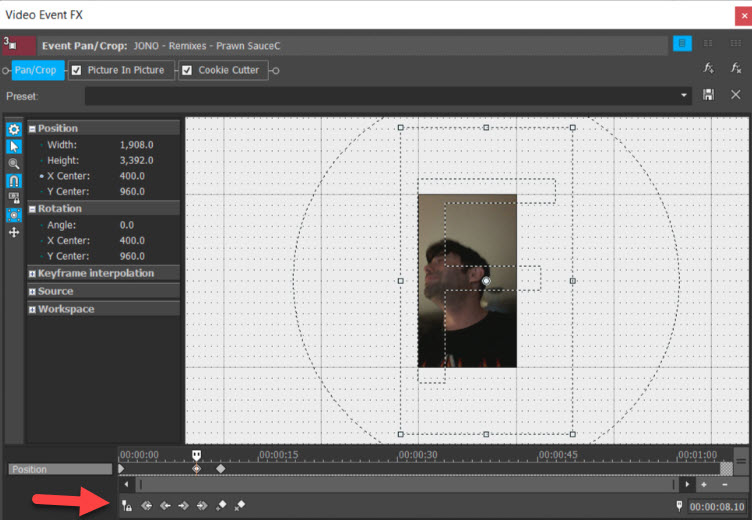 Another thing to note about what you are trying to do.
Yes you can use the Event Pan/Crop window to make images smaller by zooming out, however the Track Motion window is often a better tool to use for making images/videos smaller.
However, when you use Track Motion, anything applied to that tool affects the entire track, unless you add Key-Frames.
You can add Key-Frames or insert a New Video Track and move the item you want to make smaller onto it's own track.
I recommend you read/watch this tutorial I made, which explains how you can work with BOTH the Event Pan/Crop and Track Motion windows together.
www.moviestudiozen.com/free-tutorials/vegas-pro/546-multi-screen-video-fx-sony-vegas-pro

ℹ️ Remember to turn everything off at least once a week, including your brain, then sit somewhere quiet and just chill out.
Unplugging is the best way to find solutions to your problems. If you would like to share some love, post a customer testimonial or make a donation.

Posted 09 Aug 2022 21:12 #3
Derek amazing as always! Literally the only button I did not notice to check and hover over. I guess it's been a while since I first installed v15, which is what I was using prior to v17. Thanks for the Track Motion option too! ✌️
Last Edit:10 Aug 2022 16:13 by soularpower
The following user(s) said Thank You: DoctorZen