Solved Why do file sizes become much larger when added to msp 14 ?

Replied by ericlnz on topic Why do file sizes become much larger when added to msp 14 ?

Your problem is turning into a salvage operation!

Post the media info on one of your mp4 files here.

Also thinking ahead - do they need to go on DVD as a DVD video disk? You could put the mp4 files on a thumbdrive and hopefully a fairly recent TV or Blu-ray player should play them. Or copy the mp4 to DVD a disc as files and recent Blu-ray players (I don't know about DVD players) should read them as if they were on USB stick.

Replied by DoctorZen on topic Why do file sizes become much larger when added to msp 14 ?

Forget about trying to recapture your video, as I originally suggested.
The Elgato capture device can only output to MP4 (H.264) format.

Most of the original capture devices from years ago would record to MPEG2 format, but because HD video has now been around for more than a couple of years, that option is more difficult to find. I was just hoping that you were using an older capture device, but don't worry about that now.

Let's keep this super simple and fix your problem.
Forget about everything you have been attempting to do so far and go back to the beginning.

The first thing I want you to do, is start a NEW PROJECT - don't try a resurrect saved projects you have already been experimenting with.
This is the only way to guarantee you are not copying errors from one attempt to the next.
Make sure to perform the full program reset BEFORE you begin.

Take the idea of File Sizes out of your head as well for now - that is adding a complication you don't need to worry about.
Once I know you can render a sample video without the render crashing, then I will teach you the best method for making file sizes smaller.

Pick a sample video you have captured, that is less than 60 minutes.
Import the video into Vegas and make sure to say YES to the pop-up window that asks "Do you want to Match the Media Settings...."
Go to Project/Save As and save the project - save to a new folder with new project name - remember that this is a TEST project.

I actually make a lot of DVDs and Blu-ray discs myself each year, so I am familiar with all the common problems people can experience.
One of the things that can cause crashes when rendering to the MPEG2 DVD format, is your Graphics Card.
For some reason, on some computers, the Graphics Card creates a conflict when rendering to MPEG2 for DVD and causes a crash.
So when you are rendering to MPEG2 for DVD, make sure to turn OFF the GPU.
Go to Options/Preferences/Video/GPU Acceleration.
Set to OFF.
You will have to re-boot Vegas to make the changes active.
After you re-boot Vegas, the saved project will probably re-load automatically.
If you go back into Options/Preferences/General - the first setting makes the last saved project automatically open - I don't like this and recommend you turn this setting off for good.

Now back to your project...
I can't see your screen, so I need to know one more piece of information.
Go to the Project Media tab and click on top of video.
Below is a read out of the properties for that video.
What Frame Rate is the video using ?
I am assuming it will say 29.97 fps, if it says something different, I need to know what is says.

Let's now do test render of the video, assuming the Frame Rate is 29.97 fps.
Your original video is 640x480, so there is only one option for outputting to DVD.
Go to Project/Render As
Select MainConcept MPEG2 and DVD Architect NTSC video stream
Before you press the RENDER button, make sure to check the FOLDER location is correct, so that the video gets rendered into the correct folder.
Press Render.
Your video should now render without any crashes.
This will produce a video file only, so next you need to render to audio file in a second render. 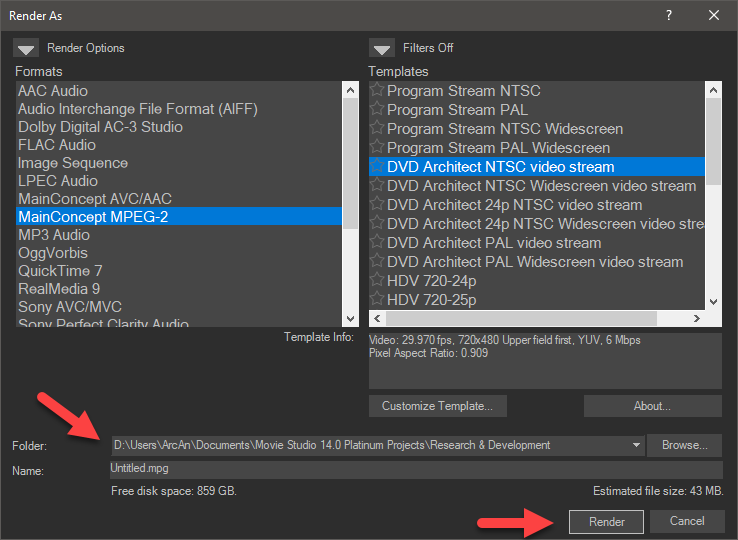 Now you need to render the audio file.
Go back to Project/Render As and select Dolby Digital AC-3 Studio - Stereo DVD
Press Render. 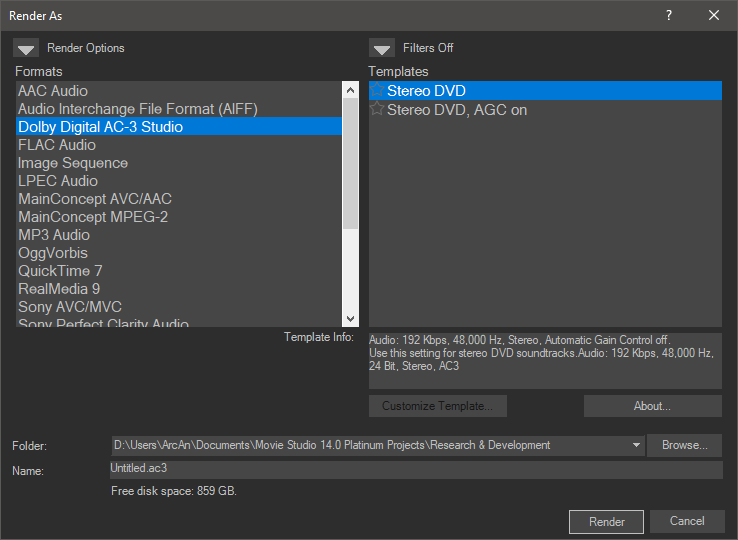 If you try and play the video back now, there will be no audio because the audio is separate.
To preview the audio and video together, you need to import the Video only into DVD Architect.
I am going to stop now and wait to hear back from you.
I don't want to progress any further, until I know you can render video without crashes.
I will wait for your reply...
Remember to turn everything off at least once a week, including your brain, then sit somewhere quiet and just chill out.
Unplugging is the best way to find solutions to your problems.
Peace

Replied by Bloak on topic Why do file sizes become much larger when added to msp 14 ?

Derek and Eric thank you VERY much for a resolved issue and both of your speedy responses !
I don't know if it was the program reset or the gpu turned off, but it works! I did a test render of a 23 min movie (1.2 gb) and a 51 min movie(2.2 gb) and burnt both in Dvd Architect and they play in the Dvd player fine.
The thought of having to re-capture 100+ hours of video was making me cringe. I've made 15 - 20 projects in msp mostly with footage from a new camera but a couple with older captured Hi 8 files and have never ran into this issue.
Now I need to make a disc with a file that is 2-2.5 hrs long and make it fit onto a Dvd if possible. Eric suggested lowering the Bitrate to 4,200 kbps(4,200,000 bps). The converted files bitrates are roughly 4,270 kbps(4,270,000 bps).
Derek is there a better method ?
On the projects I burnt today I added sharpening and contrast to help enhance the older footage.
Any thoughts or comments on ways to enhance older footage ? Thanks to both of you !
19 Dec 2017 09:40 #13

Replied by DoctorZen on topic Why do file sizes become much larger when added to msp 14 ?

Please supply me with the exact length in time of all videos you want to fit on each disc, then I will tell you precisely what to do.

The total time of all video is the only piece of information that is needed.
If you have more than one DVD you want to make, let me know the total time for each disc.

I have an in-depth tutorial on this topic, but to make things easier for you, I can help this one time to speed things up.
www.moviestudiozen.com/free-tutorials/dvd-architect-studio-50/493-how-to-compress-a-long-video-onto-a-dvd
Remember to turn everything off at least once a week, including your brain, then sit somewhere quiet and just chill out.
Unplugging is the best way to find solutions to your problems.
Peace